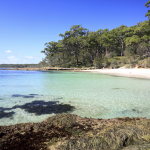 Shoalhaven Council has very recently revised its Coastal Zone Hazard Maps for Collingwood Beach. For those whose property is on the coast, these hazard lines can have significant (adverse) impact on the property’s value and development controls. If your property is deemed to be under threat it can even be seized by government . It is important that you understand and are aware of what these hazard lines mean to you. The Collingwood Beach Preservation Group (CBPG) actively engages with Council and has challenged the methods that have been applied to determine previous hazard lines.

The latest sea level rise predictions adopted by Shoalhaven City Council have been modelled by consultant Advisian to determine the impact on Shoalhaven beaches. The Advisian Shoalhaven Coastal Hazard Mapping Review report utilises (in part) the survey data that the CBPG has been collating over the last few years for the Collingwood beach dunes. The Advisian report confirms the advice that CBPG has been conveying to Council staff over the years, namely that Collingwood beach is accreting (growing towards the sea). CBPG survey measurements show that the edge of the dune vegetation is now 8m further seaward of what was the Mean High Water Mark on the original subdivision built in the 1950s. The survey measurements also show that between 1974 (100 year storm event) and November 2016 some 93,165 cubic metres of sand have been deposited on the beach, and this is with the significant June 2016 East Coast Low impacting the beach in the intervening period.

The Advisian assessment has shifted the 2030, 2050 and 2100 hazard lines placed on waterfront properties by Council seaward. The 2100 line is now located off most properties. Maps of the hazard lines for Shoalhaven beaches are included in the Advisian report. The report and map can be see by clicking Advisian Report and Collingwood Beach Map.

NEW!   VRRA-CCB Survey Results (20/06/2020)
See the results from a recent survey conducted by the VRRA-CCB about your community.

DPOP UPDATE (Delivery Plan and Operational Plan – Updated 18/06/2020)
5 years ago the VRRA responded to Council’s invitation to submit DPOP requests. To date some 12 have been submitted and of these 2 have been implemented or accepted. The rest are constantly monitored and if necessary resubmitted. To see a list of DPOPS and their current status, click here

Would you like to make a DPOP submission? Let us know your thoughts about how to better Vincentia. Submit your ideas to the VRRA Secretary via this form.